A 3D Archive of a People’s Uprising

Dispatch from “antes del olvido,” an artists collective in Chile

Chile is undergoing its most important social uprising in 30 years, and our collective is there, in the streets, documenting the movement with photogrammetry and 3D modeling.

It started when students began protesting an increase in subway fares on October 18, 2019. The demonstrations quickly grew into widespread unrest and mobilizations against the growing inequality inherited from the neoliberal regime imposed during the previous dictatorship. State agents responded brutally — at least 23 people have been killed, 300 partially blinded, thousands injured, all in the midst of continued accusations of torture and sexual violence and the government denial of human rights violations. 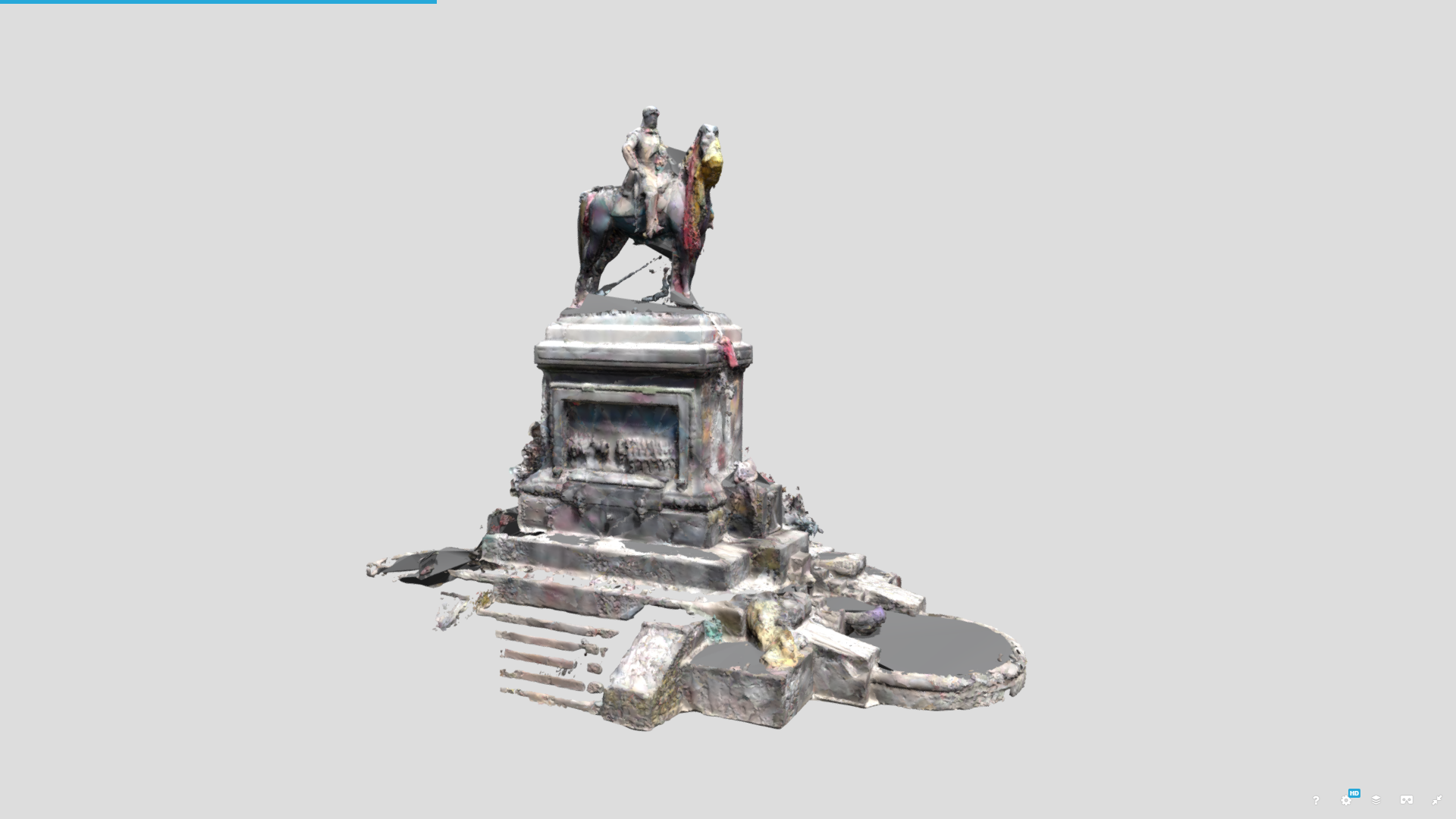 We too have come together as a collective in this spirit. We are called antes del olvido (before oblivion), a new, open collective that uses photogrammetry to document the ongoing transformations of the urbanscape produced during the uprising. We are a group of artists, designers, anthropologists, and people from diverse backgrounds that came together in late October 2019 in the midst of the crisis. Our desire is to apprehend the unfolding of the upheaval through methods that resonate with the sense of community and the disruptive, exploratory atmosphere we are living in Chile in this time.

The imprecise and ruin-like aesthetics of this lo-fi-guerrilla style photogrammetry resonates with the unstable and precarious environments we live in and the revolutionary futures in the making. Its co-creative form of production echoes the political representative crisis and the desire to find new forms of aesthetic representations while questioning traditional art-market notions of individual authorship. 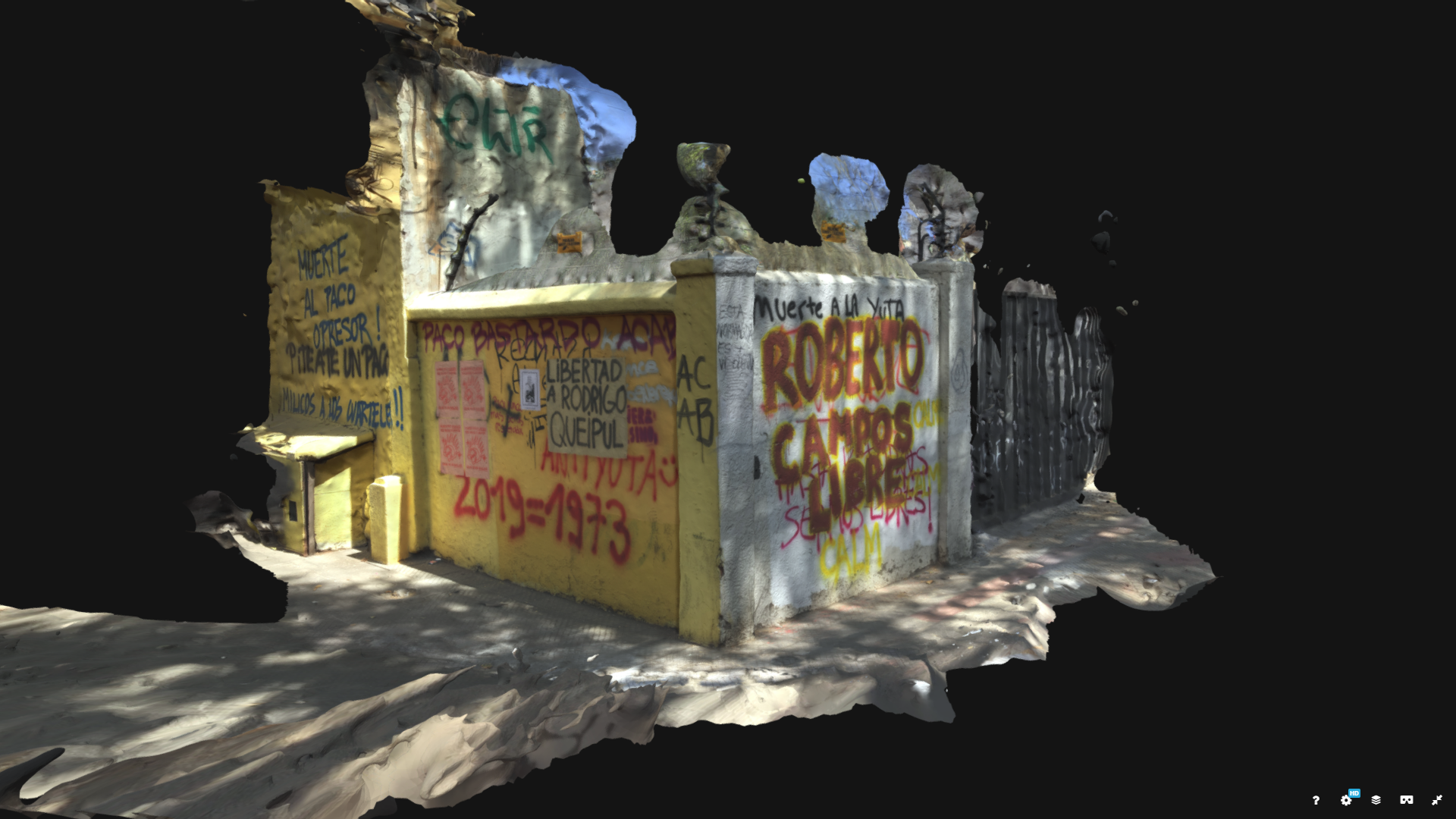 We are using photogrammetry to document the transformation of public space in the midst of this movement. Public spaces have been transformed, reoccupied, and re signified as the urban commons. The demands for equality, dignity and better living conditions have been inscribed on the walls and monuments all over Chile, particularly in downtown Santiago and one of the main places of the gatherings: Baquedano square, renamed by the people as Dignity square. What used to be a statue in the center of a roundabout and the metaphoric geographical dividing line between the wealthy north and the poor south of the city, is now a disputed space where cars rarely pass and multiple demonstrators encounter, occupy and transform. 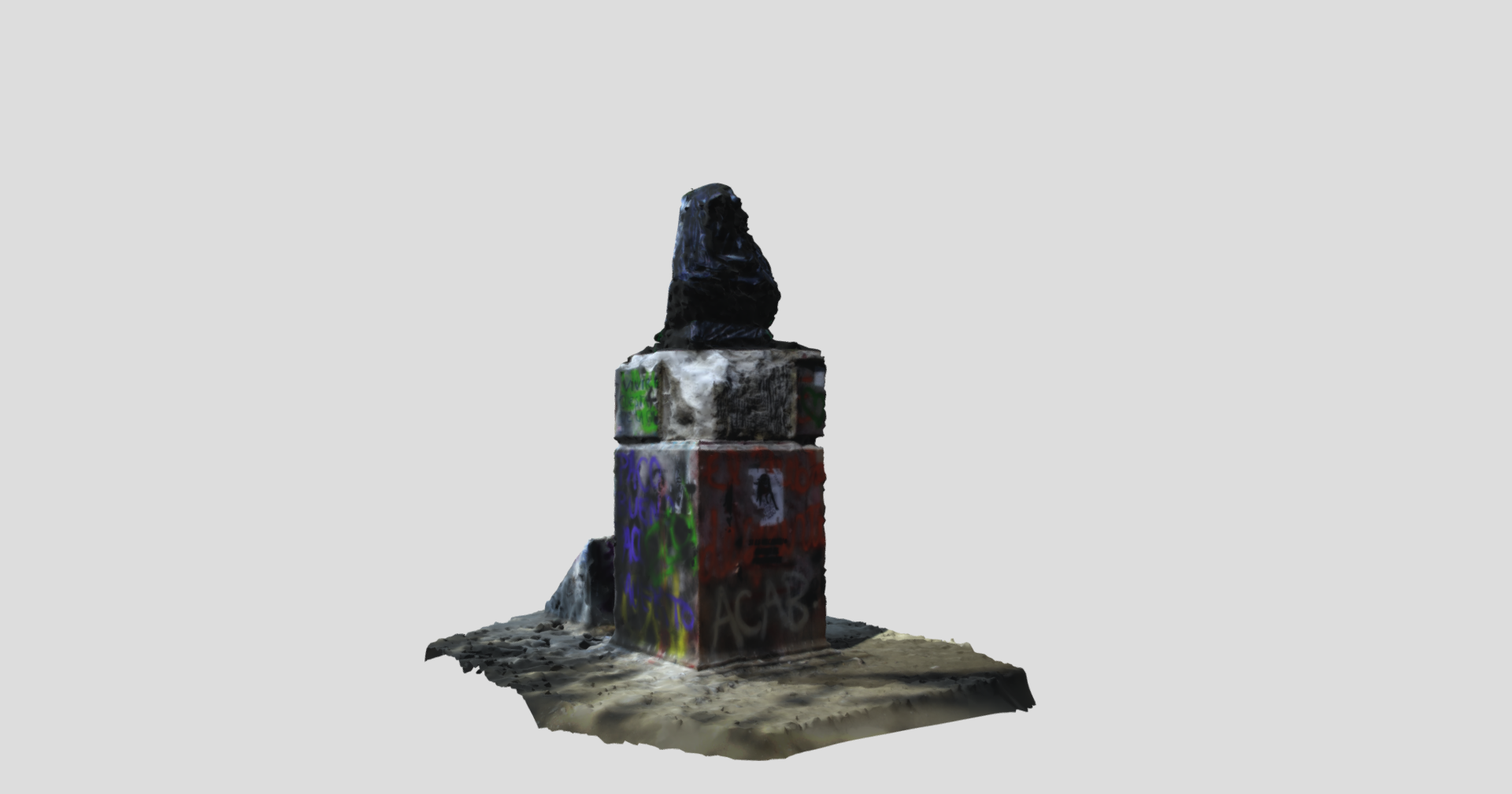 3D models of a people’s uprising

antes del olvido had as its first goal to create a public archive of 3D models of the “Chilean spring,” using photogrammetry: a technique that extracts spatial information out of a series of 2D images. So far we have captured the transformations of museums, ministries, and university facades, neoclassical monuments, metro stations, walls, and kiosks.

We have also captured the appearance of new icons such as the “negro matapacos”, a black stray anti-cop dog who became a symbol for protecting protesters from the police; and the re-positioning of ancient indigenous totems such as the Mapuche chemamüll in Dignity square to make visible the continuous violence against the indigenous peoples and the importance of the participation of the first nations in the new constitutional process underway in order to transform Chile into a Plurinational state.

We have also witnessed the disappearance of spaces such as the underground museum Tajamares del Mapocho, a place of archeological interest that was abandoned due to flooding and reburied at the beginning of 2020. 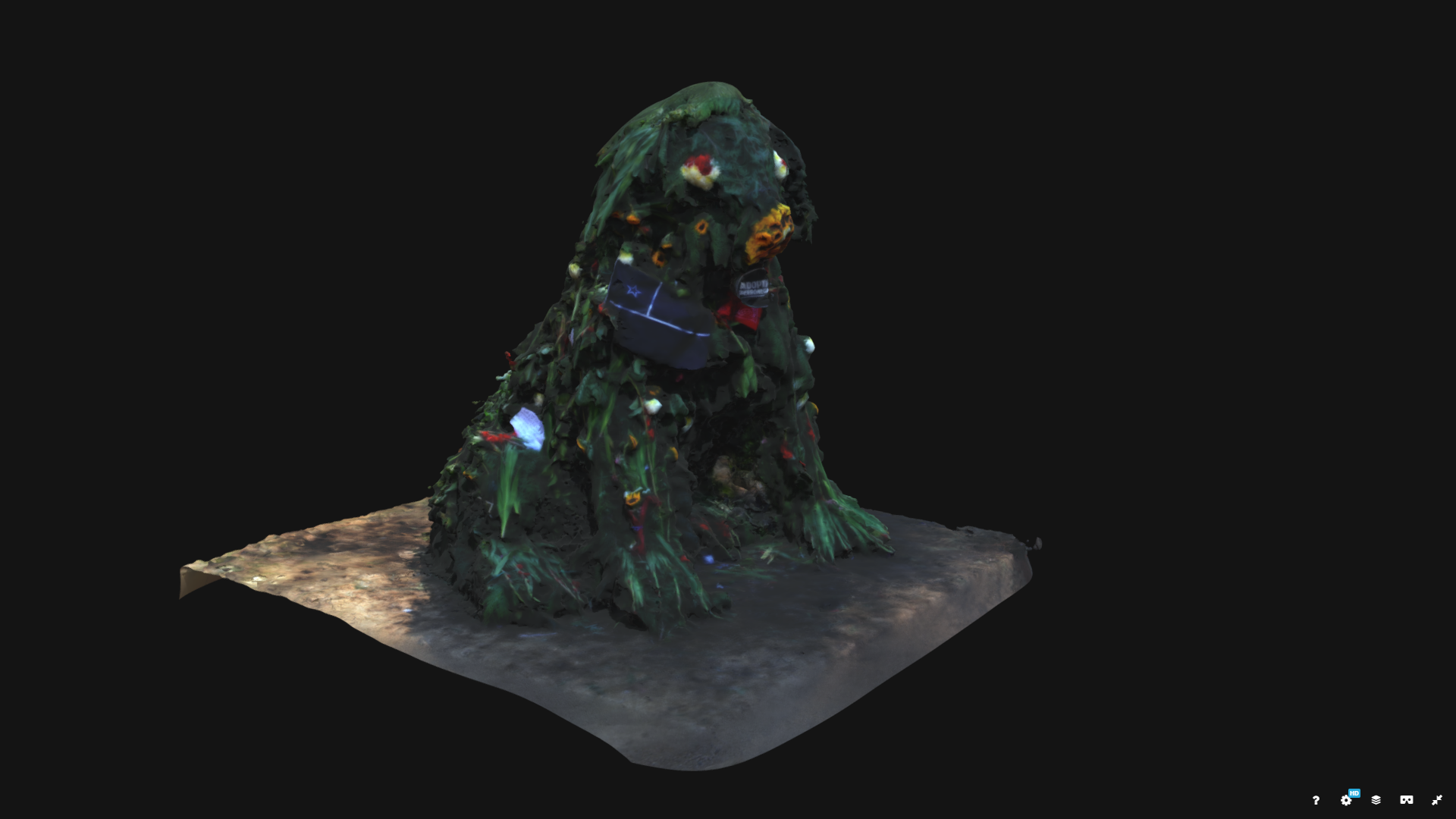 Photogrammetry in a time of uprising

Even though nowadays almost everybody owns a (cellphone) camera, the rather complex and time-consuming photogrammetry procedure is not a common practice. Therefore, antes del olvido soon became a creative learning platform. Via workshops, we have been using photogrammetry as a method of archival and memory making, teaching through making, and emphasizing the importance of the collective work involved in mapping this history and its unfolding. We have been experimenting with this platform as a model of viral education: each workshop is not only instructive on the techniques involved but on the way to teach them and, most importantly, on expanding the participation in the creation of this archive. The workshops have also turned into a space of methodological explorations of the technique in itself, developing, for example, the collective photogrammetric capture: a group of people positioned in a semicircle photographing the object together.

Collective photogrammetric capture during a workshop in Recoleta, Santiago. As antes del olvido was born out of uncertainty and is still in the making, it is pretty open-ended. Some features we are concerned with keeping are its collectiveness, horizontality, and that it is not for profit, but for culture. Some elements we want to continue exploring are the viral learning approach, the archive making, and the creative openness.

The archive is really important for us due to the strong facility that we/people have to misremember intense and traumatic events, particularly in Chile. The cleaning of memory is something that was strong during and after the dictatorship, and human rights violations’ denial is common even today. Within this context, to collectively produce an archive of the process of the uprising is a political tool, an artifact for collective memory. Before these spaces are cleaned up, we are assuring that they will live on in virtual spaces for future generations to get to know them. Finally, what creative openness holds in mind is the use of this artifact as an inventive platform to visualize other possible horizons—a platform for prototyping, playing, planning, to exercise the act of imagining a different form of living out of the ruins of capitalism. 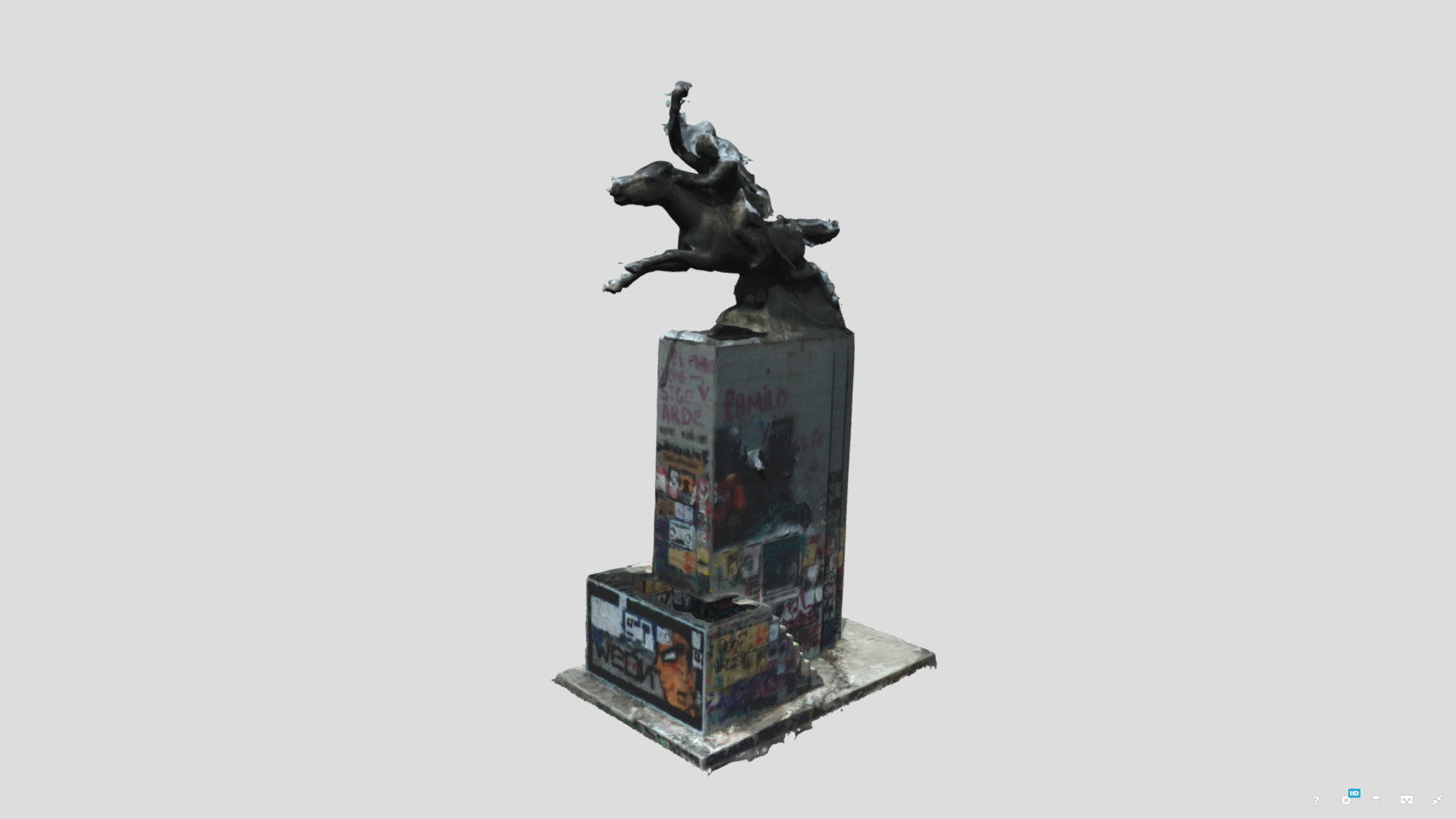 Josefina Buschman was a Research Assistant at Co-Creation Studio and Open Documentary Lab, and graduated from MIT CMS/W in 2019

This article is part of